Quick Links:
You are here: Home / Polaris / The princess of France
nn

The princess of France 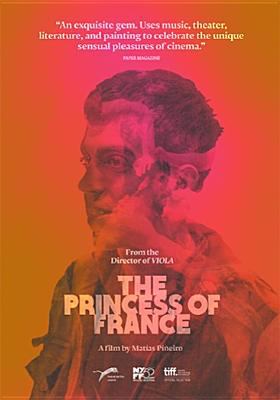 Victor returns to Buenos Aires after his father's death and a stay in Mexico to prepare a radio production of Love's Labour's Lost. Reuniting with his repertory, he finds himself sorting out complicated entanglements with girlfriend Paula, sometime lover Ana, and departed actress Natalia, as well as his muddled relations with the constellation of friends involved with the project. As the film tracks the group's crisscrossing movements and interactions, their lives become increasingly enmeshed with the fiction they're reworking, potential outcomes multiply, and reality itself seems subject to transformation. An intimate work that takes characters and viewers alike into dizzying realms of possibility.
Check Availablity View on Amazon

74727
x
Contactless pickup of holds and Bundle Bags are available at all branches. Details at https://hclibrary.org/contactless-pickup.
x
Due to inclement weather, all HCLS branches will open at 11 am on Tuesday, January 26. Items previously scheduled for contactless pickup on Tuesday morning can be picked up Tuesday afternoon through Thursday of this week. We regret the inconvenience.